Non-surgical rhinoplasty or the no-scalpel nose job is a thing! Modern techniques with nose filler can reshape your nose, and this approach is becoming increasingly popular.  Also, called an injectable rhinoplasty, many people stumble upon this procedure by researching the internet for rhinoplasty. Not realising nose imperfections can be corrected without surgery.

We first performed non-surgical rhinoplasty at Pearl Medispa Brisbane in 2009. Since that time, there has been a significant refinement of the procedure. The nose filler used and techniques to improve the safety of the reshaping have both advanced.

Who is a typical client for a non-surgical nose job?

Men and women both seek an injectable rhinoplasty. However, the majority are ladies (90%) who are unhappy with their nose shape. Asian ethnicity makes a significant portion of this group, with treatment focused on building a higher nose bridge, lifting the tip and creating a more refined look.

Other reasons people choose a nose job: individuals with a bump or hook nose wish to camouflage, and people with imperfections left after rhinoplasty.

Men more commonly come with flaws from injury (football, sporting injuries or accidents), where the nose filler is used to recreate a straight nose. Also common in men is hiding the bump on the bridge of the nose.

Increasingly non-surgical nose reshaping is being added as an anti-aging treatment. Minor tweaks to lift the nose tip create a younger appearance. An injectable rhinoplasty for anti-aging therapy is commonly combined with other anti-aging injections.

What can be achieved with non-surgical rhinoplasty?

Nose fillers can correct most cosmetic concerns regarding your nose — camouflage for minor deviations, humps and hooked appearance. In addition, the nasal tip can be shaped and rotated upwards, the nose bridge can be built up, a broad nose can be refined, and nostrils can be made to appear smaller.

For a Free Consultation with our Doctors 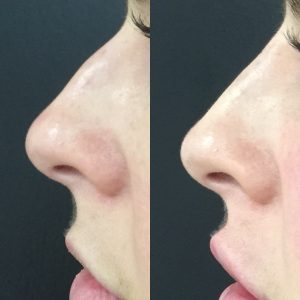 smoothing a nose-bump
*Results are individual 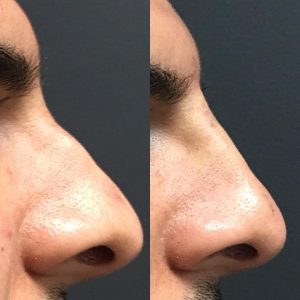 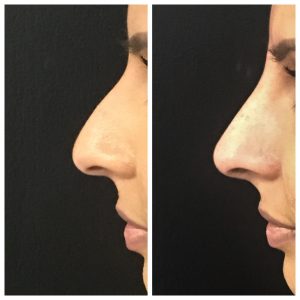 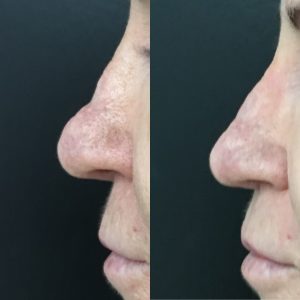 What aesthetic concerns are treated with an injectable rhinoplasty?

Nose fillers are a method used to improve the cosmetic appearance of your nose. They are used to target a range of concerns, including smoothing small nose bumps and lumps or refining flatter noses. Our Brisbane doctors at Pearl Medispa use their skills and industry knowledge in every filler session and work to create a new look for you.
These nose fillers work to improve:

Aesthetic and physical problems are corrected with rhinoplasty or nose reshaping surgery. It is performed to correct a defect from injury or birth, relieve breathing problems or purely cosmetic reasons. Nose fillers do not help correct internal nose problems.

A Rhinoplasty (nose job) is one of the most frequently requested treatments from plastic surgeons. However, there are downsides, including risks associated with anaesthetic and surgery, two weeks downtime for recuperation with considerable discomfort and the cost of $3000 – $5000. The injectable rhinoplasty does have potential complications as well, which our Doctors will explain before treatment.

A non-surgical rhinoplasty appeals to people who do not have the time to take off work, are not keen on the expense of rhinoplasty, do not want to undergo surgery.

What Happens To Your Nose As You Age?

The nose continues to elongate and broaden as you age. Though the rest of your skeleton stops growing, some parts of the body continue to enlarge. The nose is one of these. But the elongation causes drooping of the nose tip. Simple nose filler treatments can lift this tip.

As well as performing the full range of dermal fillers, including lip filler, chin, jawline and cheek filler they have areas of speciality. So let us know what you are interested in when you book, so we know who is best for your concern. Our Doctors each have their specialty areas, including non-surgical rhinoplasty and skin tag removal.

For a Free Consultation with our Doctors

Contact Us
What cannot be achieved with a non-surgical nose job?

What cannot be achieved with a non-surgical nose job?

A filler cannot correct septal deviations (rhinoplasty required), make a nose trimmer, nor can they refine a bulbous tip.

How does an injectable rhinoplasty change your nose shape?

How does an injectable rhinoplasty change your nose shape?

Adding small amounts of filler can change the appearance of the nose without surgery. Lifting the nose bridge, the nose tip, or plumping out your nose dip is easy to understand.

How does injecting nose filler make your nose look smaller?

How does injecting nose filler make your nose look smaller?

The way light falls on your face creates the definition and the way we perceive our features. Just with your body adjusting, the clothes you wear changes how slim you look because it draws the eye to the narrower point — the same with our noses.

Many people choose non-surgical rhinoplasty to improve their aesthetic appearance.

Do You Want To Find out more about Nose Fillers?

Do You Want To Find out more about Nose Fillers?

Pearl Medispa (formerly SkinRevision est. 2016)  was developed as we integrated gut health and wellness into our cosmetic medicine menu. We still offer cosmetic medicine treatments with our Doctors and therapists. In addition to our non-surgical face and body treatments, we offer gut healing protocols, nutrition and naturopathy services.

Pearl is an ancient Chinese beauty adaptogen, Pearl is also a classic symbol of natural beauty and wisdom. Pearl is perfect for integration of holistic services with traditional cosmetic medicine.

Pearl is a sustainable salon.